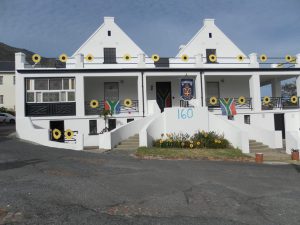 [By Rebecca Malambo, Diocese of Cape Town] On Friday, 9th March 2018, learners from the two primary schools (boys and girls), high school (Zonnebloem Nest) and staff of the Children’s Art Centre gathered at the Manor House on Zonnebloem Estate to celebrate the 160th anniversary of Zonnebloem.

The Revd Karl Groepe, representing the Anglican Church, opened in prayer and shared pearls of wisdom with the learners and teachers.

On 11th March 1858, a school opened its doors for the first time in the outhouses of the farm Protea, the home of the first Anglican bishop of Cape Town, Robert Gray. The school was a joint venture between Bishop Robert Gray and Sir George Grey (Governor of the Cape Colony) and was intended primarily but not exclusively to be a place where children (prince and princesses) of the Chiefs mostly from the border region of the Eastern Cape Colony could come and be educated and Christianised.

The school opened with 39 pupils, 36 boys and 3 girls but by the end of 1859, the numbers had grown and the Bishop was forced to seek new and larger premises for his school. About this time the farm, Zonnebloem (place of the sunflowers) situated on the slopes of Devil’s Peak just outside the City of Cape Town came onto the market and the Bishop and Governor pooled their resources and purchased the farm as the new home for the school. The school moved there in 1860.

The name of the farm, adopted as its emblem the sunflower and created the Latin motto ‘Et Fili Lucis Ambulate (Walk as children of the light). 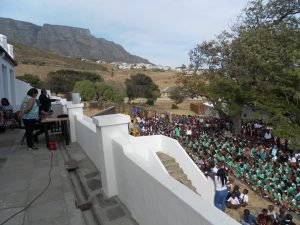 I have a beautiful still life painting by a student at Zonnebloem in 1967 where my late sister-in-law Ann Moseley was a junior art teacher. I’d love to hear from a student who may remember painting it. Ann was sad and angry that the student was the only student in that year to be given a failure mark in the exams. Ann went on to marry Frank McEwen, Director of the National Gallery in (then) Salisbury, Rhodesia, and helped him to encourage and promote the work of African artists and sculptors. They left after falling out with Ian Smith’s government, and spent 10 years in the Caribbean before retiring to England. Ann treasured this painting by her pupil, and it hung in pride of place in the sitting room of her small home in Devon until she passed away in July 2016.
If this story rings a bell please email me at tony.richmond@tiscali.co.uk and I will email back a pic of the painting.