Shirley Moulder admitted to Order of Simon of Cyrene

The citation read by Archbishop Thabo Makgoba upon admitting Shirley Moulder to the Order of Simon of Cyrene during the 2017 Provincial Standing Committee meeting:

For five decades, the name of SHIRLEY MOULDER has been synonomous with the advocacy of dialogue, equality and justice as well as work in the fields of community development, education and social entrepreunership in the Church, the ecumenical community and both government and the non-governmental sector in South Africa.

Shirley trained as a nurse but was not able to pursue her profession as the result of injury. Instead she became involved in community development work, beginning with Kupugani and the Church Agricultural Project. Since then she has become a leading figure in organisations, ministries and initiatives too numerous to mention, ranging from schools and children’s homes to resource organisatons, not-for-profit social housing companies and a peace foundation working in Asia.

She is above all a social activist whose activism is rooted in her deep faith, which inspires her advocacy on issues of social justice, reconciliation, the transformation of society, education and growing inequality in South Africa. 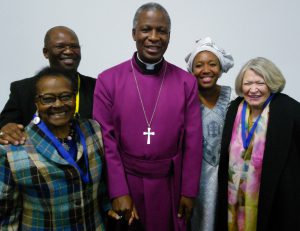