Published 24th May 2018 | By Bishopscourt Media 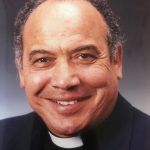 We regret to announce to the Province the unexpected death yesterday of the Revd Canon Rowan Quentin Smith, a former Provincial Executive Officer and former Dean of Cape Town.

Father Rowan broke his hip in a fall at St George’s Cathedral on Good Friday, and appeared only recently to be recovering steadily.

He was educated at Kensington High School, Cape Town, King’s College, London, and St Boniface Missionary College, Warminster. He was ordained Deacon in St. Nicholas’ Church, Matroosfontein in 1967 and Priest in St.
George’s Cathedral in 1968, by Archbishop Robert Selby Taylor.

He spent the decade from 1977 as first a novitiate and later a professed member of the Community of the Resurrection, serving for a period as Chaplain to St. Martin’s School, Johannesburg.

After being released from his vows, he became in turn Chaplain to the University of Cape Town, Chaplain to Archbishop Desmond Tutu and Provincial Executive Officer until Archbishop Tutu’s retirement. He then served as Dean of the Cathedral from 1996 until his retirement in 2010.

His funeral will be held in the Cathedral at 9 am on Saturday June 2.

May he Rest in Peace and Rise in Glory.

9 Responses to Death of the Revd Canon Rowan Q Smith