The bishops have sent a letter to those affected by Cyclone Dineo in the two dioceses of Mozambique and the Diocese of St Mark the Evangelist extending their prayers and concern for the loss of life and devastation caused by the storm.

In a letter written from the Synod of Bishops, they added: “The loss of human lives, livestock and crops is a tragedy to God’s creation. We pray for God’s protection for all vulnerable communities as they seek to recover their losses and rebuild their infrastructure.”

In a resolution the Synod also decided to ask HOPE Africa, in discussion with the affected dioceses, to draft a relief intervention to assist communities and to call on all parishes and dioceses to contribute financial assistance to resource the relief plan. 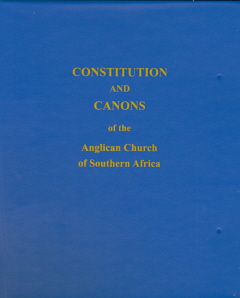 The blue A5 file containing the Constitution and Canons of the Anglican Church of Southern Africa is once again available @ R120 each.

It contains all the amendments to the Canons arising from Provincial Synod 2016.

Supplementary pages for those who already have the file are also available, @ R60 a set.

Christians urged to take part in carbon fast during Lent

Diocesan Alert:  If you have news for the website please email Loraine Tulleken at: tulleken@iafrica.com

Liturgies do not only offer comfort, they also serve to challenge our present context, our assumptions and presuppositions about the world, about others, God and ourselves, as we look forward to Christ’s coming again. Our understanding of  God, ourselves and the world change, and with it the way we express ourselves.

Do we have a Prayer Book today which is truly African in form and context? Does it represent the local Southern African situation? To be honest, one would say no. An Anglican Prayer Book, 1989 has been with us more than 25 years now and one may ask – does it really bear witness to the African context?   In some areas it is more successful than others.

The process to revise APB 1989 was first proposed by the Synod of Bishops in 2012. The Bishops called for a revision that would deal with the masculine and patriarchal nature of the text, in particular with the masculine pronouns for God and for people that are used throughout APB 1989.

This proposal was taken to Provincial Standing Committee, who amended the proposal to include a thoroughgoing revision of the whole book in order to make it more relevant to and expressive of our Southern African context. This task was given to the ACSA Liturgical Committee. Together with a Prayer Book Revision sub-committee, the process of revision has started.

The first publication in the series of revisions is titled Celebrating Sunday with  a sub-title  Under Southern Skies in an African Voice  and the idea of producing liturgy that is African in the southern hemisphere will govern  the process going forward.  Who we are and what we are in this Province of the Anglican Communion is important.

The whole revision project is expected to take about 10 years or more to complete.

“You are the salt of the earth… You are the light of the world. Let your light so shine before people that they may see your good works, and glorify your Father who is in heaven.” – Matthew 5: 13-16
The Synod of Bishops of the Anglican Church of Southern Africa, assembled in Benoni from February 20 to 24, reflected on the state of education in South Africa with specific regard to the disruptions of the educational process arising from the protests over university fees, curricula and the living conditions, transport problems and safety of students which have formed part of the #FeesMustFall, #Decolonized Education and similar campaigns.
The 2017 academic year
The Synod of Bishops applauds the efforts of students, university management teams and the National Education Crisis Forum to save the academic year at the end of 2016. We pray God’s blessings over the 2017 academic year and beyond.
Civil society involvement
The Synod acknowledges and wishes to encourage the tremendous work of civil society through the South African Council of Churches, the Higher Education Parents Dialogue (HEParD) and the National Education Crisis Forum, and of the business community and political parties in certain areas, in engaging with government, university managements and students in seeking to normalise life on campuses while at the same time addressing the real and urgent problems which #FeesMustFall and #Decolonised education activists have brought to the fore.
The responsibilities of students
We acknowledge the right of students to protest over issues about which they feel strongly. At the same time we plead with them to find and maintain constructive ways of making themselves heard without resorting to violence or destructive action. We urge them to accept the responsibility for facilities on their campuses which  accompanies a sense of being co-owners of their institutions.
The responsibilities of university managements
We plead with university managements to adopt a deep listening posture in response to student unrest, and to work with students to find creative solutions to the pressing issues with which we are confronted. While we are grateful for those campuses which have returned to normality, we are deeply concerned at the presence of police and increased numbers of security personnel on a number of campuses. This militarised presence kills dialogue and serves to deepen polarisation between students and management. In doing so, it induces a false sense of calm on those campuses, which conceals the potential for renewed violent confrontation. We therefore also call on university managements to withdraw the police and to scale back to normal levels the presence of security guards on campuses.
The Government’s responsibility
Whilst we commend efforts by government to address the tertiary education crisis, we feel it is at times overwhelmed by it and we would like to see government, especially the Minister and the Department of Higher Education and Training, play a more pro-active role in addressing it. We strongly urge the government to seek more creative ways of providing more resources for education, and in particular of creating a “free funding model” for tertiary education – including provision for high earners and companies to contribute to the costs of that education – so that students do not have to graduate with crippling levels of debt. We acknowledge the Minister of Finance’s  allocations for tertiary education in his budget and we appeal for further tangible commitments and timelines for increased funding.
Conclusion
We call the church to prayer and action to help all parties involved to develop a new vision for the future of education in our land, a vision which will guide us in finding a long-lasting solution to the challenge of giving all our children, especially those living in material poverty, access to a good education which enables them to realise their God-given potential.
Benoni, February 2017

There will be a period of Monitored Trial Use of Celebrating Sunday, the Province’s new resource produced as part of the development of a new Prayer Book, during  Eastertide 2017, from 16 April to 4 June.

Commentary on the death of 94 Mentally challenged people

The 52nd Session of the Synod of the Anglican Church of the Diocese of Kimberley & Kuruman expressed great sadness at the deaths of 94 mental patients who died because they were disrupted by what appears to be insensitive relocation.

We learnt that despite objections and pleas by their families their comfort thus contributing directly to their tragic deaths.

We further noted the cold and insensitive attitude of the speaker of the National Assembly, the Hon Baleka Mbete, who found it impossible to concede to a request for a moment of silence to acknowledge the tragedy.

We believe that such a gesture would have meant a lot to the grieving families. Unfortunately, this rejection reflected on the entire ruling party since none of them risked the opportunity of making such a conciliatory and sympathetic gesture.

We continue to pray for the families as they struggle to get to grips with the situation. We also pray for those in authority that they may be enabled to make good and right decisions – rather than expedient ones.

May God bless all who can and do make a difference and may we all be convicted to always take the right decisions for the benefit of the vulnerable people in our midst.

NB: At the time when this statement was being prepared, it was reported in the press that the number of deceased had grown to 100 and probably beyond. We make a serious call for those in authority to address this matter with the urgency it deserves and take bold steps in putting remedial plans into place.

The Dean of Johannesburg, the Very Revd Xolani Dlwathi, addressed the city’s Mayoral Budget Lekgotla on the moral responsibilities of government to provide clean and accountable governance.

The full text of his address to the city’s civic leaders can be found by downloading the PDF below.

The Liturgical Committee’s notes on using Celebrating Sunday at Epiphany.

Download the PDF from the link below to read Update No. 9 on the Prayer Book revision process from the Liturgical Committee.

Download the attached PDF to read the update from the Liturgical Committee on the development of the Prayer of Humble Access.

The ACSA Liturgical Committee has become aware that there is a widespread assumption that a ‘new’ Prayer Book has been produced and it is available now.

Many of those placing orders for Celebrating Sunday, the new experimental supplemental liturgical resource with materials for Advent through Pentecost have done so assuming that it is the New Prayer Book.

The Committee is calling upon everyone involved in liturgy and the leadership of worship, to help correct this misunderstanding.

Expecting a New Prayer Book is an appropriate eagerness that we welcome-  however, such an expectation will only be met after many years of hard work.

The New Prayer Book has been called for by the Synod of Bishops and Provincial Synod – and is a goal which the Liturgical Committee is diligently pursuing.

However revising APB 1989 is a process, one that will require the involvement of the whole Church, much work, and many years. During those years the Liturgical Committee will be producing several supplemental liturgical resources authorised for experimental, trial use. Celebrating Sunday is the first in this series of publications.

These supplemental resources will be the result of a process of wide consultation among the people of ACSA and will reflect the diverse styles of worship common to our Church while maintain the characteristic features of Anglican Worship.

The ACSA Liturgical Committee looks forward to continued communication with everyone involved in the worship we offer and with eagerness anticipates your involvement in this exciting and historic process of Revision and Renewal.

Following three years at Bishopscourt, Canon William Mostert has returned to a parish in Edenvale, Highveld Diocese. I am grateful for his ministry at Bishopscourt over these years.

Last week Friday, I licensed the Ven Horace Arenz as the new PEO.  Ven Arenz was the Diocesan Administrator in the Diocese of Cape Town and Archdeacon to the ordinary. He comes with vast administrative experience as well as pastoral knowledg . He will serve the province well.

Yours in the service of Christ