“Obama and Makgoba to visit Germany for 500th Reformation anniversary.”

That is how the Evangelical Church in Germany (EKD) and its annual “Kirchentag” festival headlined their announcement that they had invited Archbishop Thabo to preach at the culmination of this year’s celebrations in Wittenberg, the university town in which Martin Luther sparked the Reformation 500 years ago. 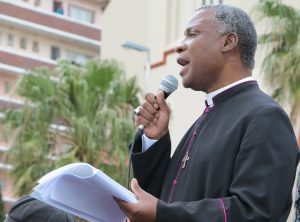 The organisers say they expect 100,000 people at the festive service, which will be held on Sunday May 28 in a meadow the size of 50 football fields on the banks of the River Elbe outside Wittenberg.

Ahead of the service, on Ascension Day, former president Barack Obama will join Chancellor Angela Merkel, an observant Christian, for a discussion on “Being Involved in Democracy: Taking on Responsibility Locally and Globally”. It will be held at the Brandenburg Gate in Berlin.

Announcing the participation of President Obama and Archbishop Thabo, the EKD and the festival noted that the United States was “strongly marked by the Reformation and its historical impact.”

The president of the Kirchentag, Professor Christina Aus der Au, added: “Protestantism has not remained a European affair – it has shaped societies and nations all over the world. We are thrilled that Archbishop Thabo Makgoba has agreed to preach at the Festive Service, coming as he does from a country that has a very intensive history of Protestantism.”

The chair of the EKD’s council, Bishop Heinrich Bedford-Strohm, added: “Thabo Makgoba has become an example for many people, not only in Africa. This due to the passion with which he so authentically and visibly lives out his Christian faith in a country that is rich and yet deeply divided. We can really look forward to his sermon.”

In another honour for African Christians recently, a Nigerian Lutheran bishop, Archbishop Dr. Musa Panti Filibus, was elected as the 13th president of Lutheran World Federation. The global communion of Lutheran churches held its assembly in Namibia earlier this month.