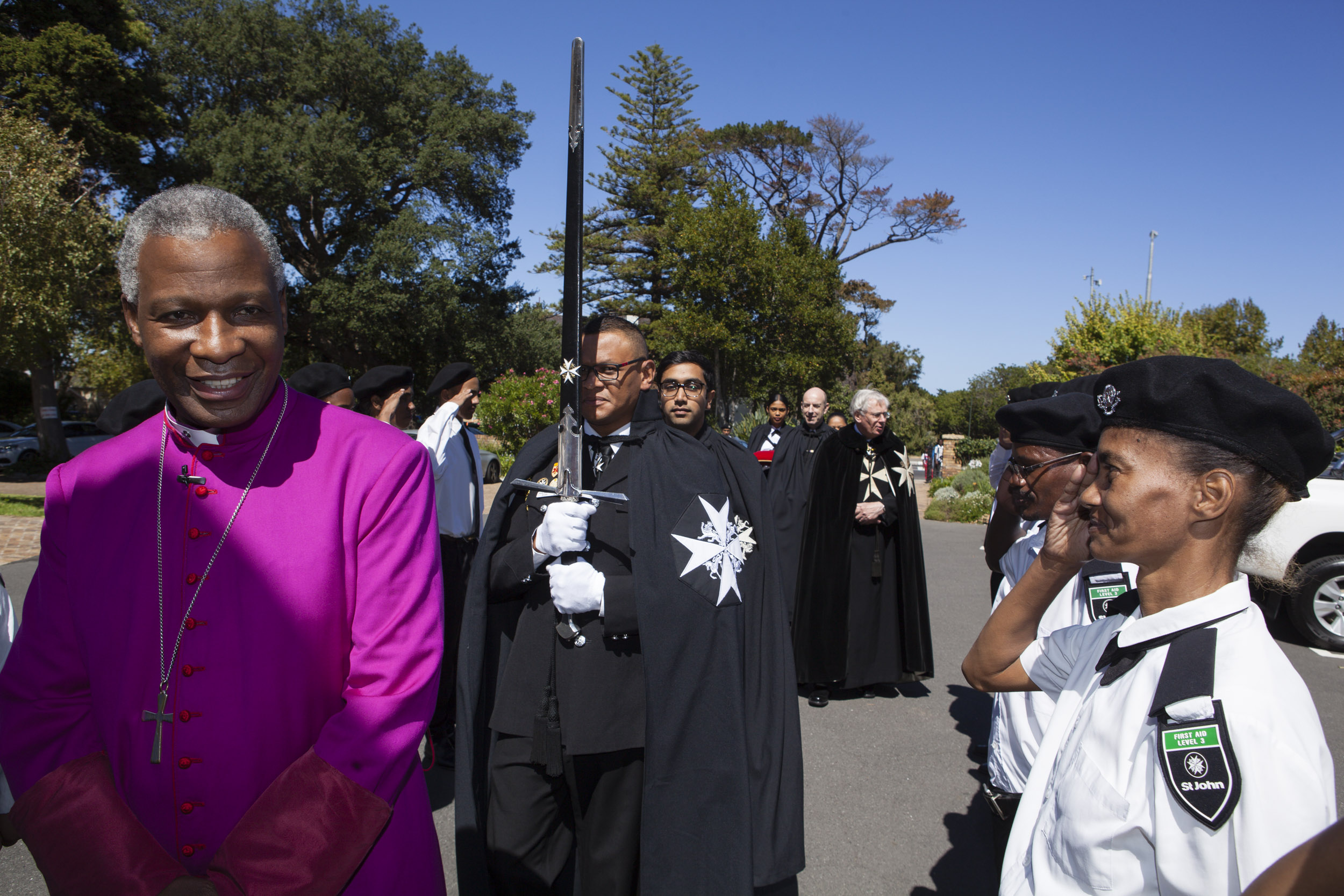 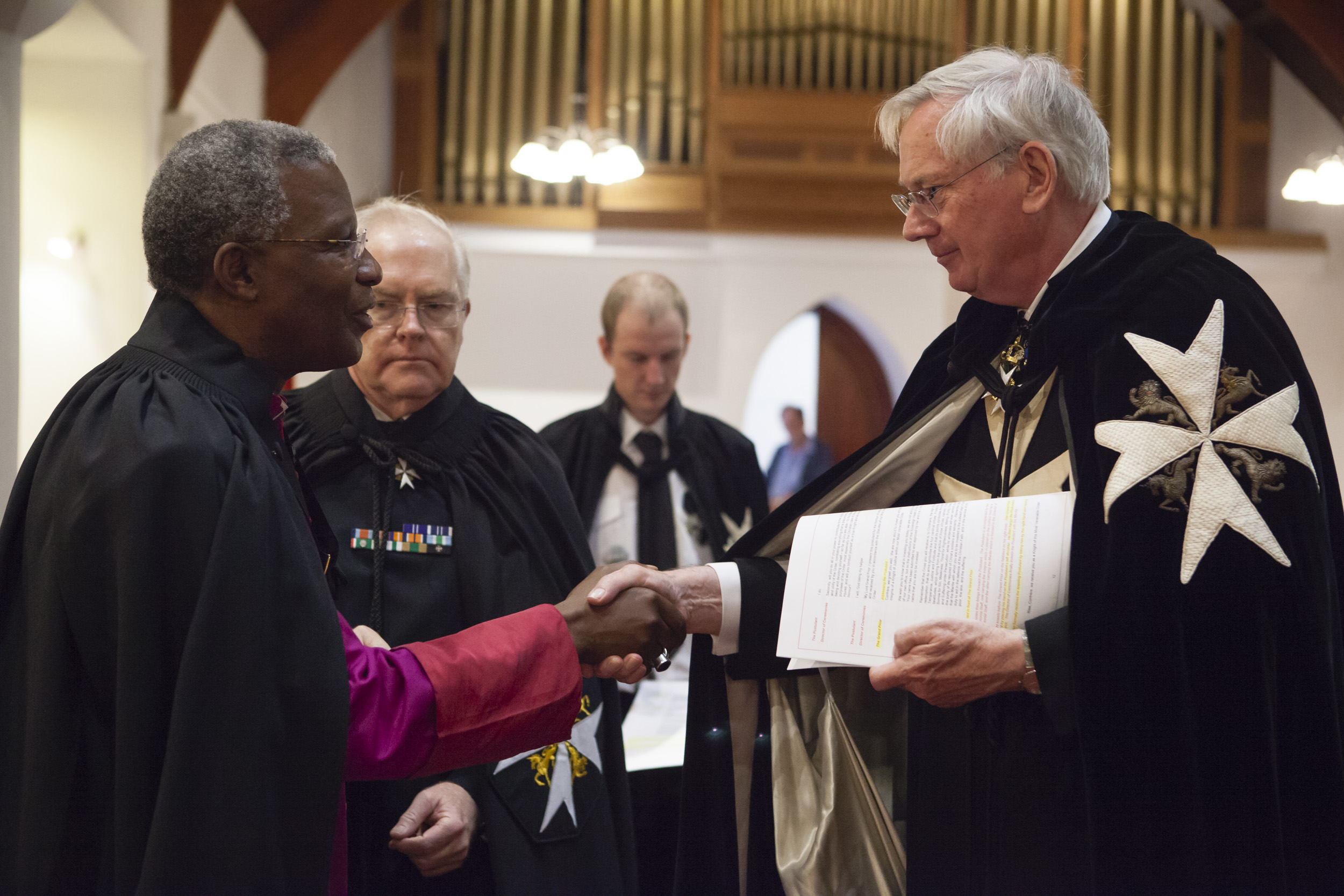 The Duke of Gloucester Congratulates the New Prior 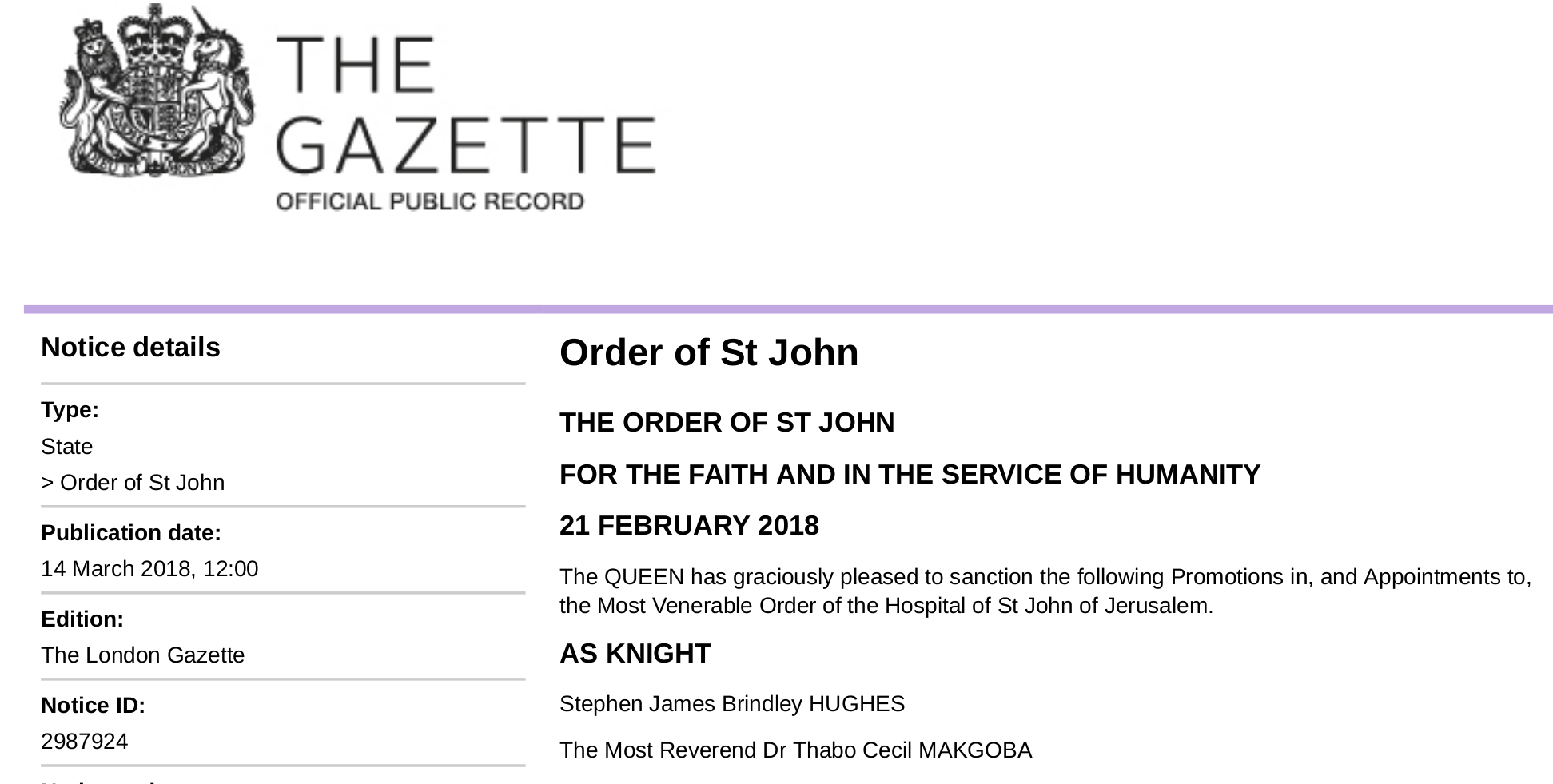 [St John News Release] The Most Reverend Dr Thabo Makgoba, Archbishop of Cape Town was installed as Prior of the Order of St John in South Africa by His Royal Highness, Prince Richard Duke of Gloucester KG GCVO GCStJ at a ceremony held at Christ Church, Constantia in Cape Town earlier today.

At the same ceremony, Archbishop Makgoba was invested as a Knight of Justice of the Order, committing himself to the care of the sick and injured in line with the mottoes of the Order ‘For the Faith’ and ‘in service of humanity’ – Pro Fide and Pro Utilitate Hominum.

The ceremony incorporates hundreds of years of tradition, displaying the processional symbols of the Cross of the Order, the Sword and numerous colourful banners. Today’s ceremony had a distinctly South African flavour with volunteer St John Community Health Workers (typically known for taking health care services to young and old in communities such as Nyanga and Gugulethu) singing in praise of the new Prior.

Volunteer members of the local St John Brigade, known countrywide for their provision of emergency care services, played a pivotal role in the ceremony, leading processions and forming a Guard of Honour for the new Prior and his esteemed guests.

The Archbishop takes over the reins of the South African Priory from Archbishop Emeritus Desmond Tutu who served as the head of the non-profit organisation from 2012 to 2017.

1. The Order of St John dates from the first Crusade in 1099 and is the only Order of Chivalry still performing the work for which it was originally founded – to alleviate the suffering of all mankind everywhere and to encourage its spiritual growth.

2. St John is a leading international supplier of first aid courses, first aid kits and community health care training. They are dedicated to improving the health, safety and quality of life of all South Africans through the provision of First Aid and Community Health training, Eye Care and various community projects.

3. Active in South Africa for over 130 years, St John offers a range of services including:

Eye tests and the provision of spectacles

5. There are currently 274 St John Community Health Volunteers working in local communities. They provided 100 779 nursing and home visits in the past year, treated more than 9 829 first aid cases and gave 146 health related talks and workshops to various community groups.

6. St John – South Africa operates 12 eye care clinics in major cities and towns around the country. Each clinic performs professional eye testing and dispenses spectacles to those underprivileged members of the community who are unable to afford commercial rates. Certain clinics offer free testing and spectacles to over 300 people annually (most notably the elderly and school children).

WHAT IS THE ORDER OF ST JOHN?

The Order of St John, formally the Most Venerable Order of the Hospital of Saint John of Jerusalem (French: l’ordre très vénérable de l’Hôpital de Saint-Jean de Jérusalem) and also known as St John International, is a royal order of chivalry first constituted in 1888 by royal charter from Queen Victoria…

The order is found throughout the Commonwealth of Nations, Hong Kong, the Republic of Ireland, and the United States of America, with the worldwide mission “to prevent and relieve sickness and injury, and to act to enhance the health and well-being of people anywhere in the world.” The order’s approximately 25,000 members, known as confrères, are mostly of the Protestant faith, though those of other Christian denominations or other religions are accepted into the order…

The Order of St John is perhaps best known through its service organisations, including St John Ambulance and St John Eye Hospital Group, the memberships and work of which are not constricted by denomination or religion. It is a constituent member of the Alliance of the Orders of Saint John of Jerusalem. Its headquarters are in London and it is a registered charity under English law.